When I applied for my position on the board, I responded to the single question on the application, a question about the single biggest challenge with education, with a short discussion of the vise that school boards have been placed within.  On one side are the increasing demands to meet state- and federally-mandated standards (and as an engineer I support standards) along with the knowledge that I lived in a community that had a demonstrated passion for a rich, rigorous, diverse education.

On the other side was the Act 1 limitation on funding to support the programs that these requirements demanded.  I noted that these conditions placed lay-controlled boards in the inappropriate position of defining educational programs based on fiscal limits rather than the good practices and experiences of our hired, professional administrators.  I noted that this position was unsustainable.  Little did I know how serious the situation would become.

I don’t plan to get too upset on this blog very often, but I do want to make sure you know the facts I’m working from.  Sometimes these facts are angering.  If I have misinterpreted any of this, please set me straight.

Based on published Act I Index information from the Pennsylvania Department of Education, I created the image below that depicts the budget growth indices for Pennsylvania counties for the 2010-2011 fiscal year: 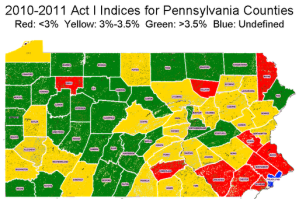 It’s a little rough, but if it doesn’t make you scratch your head, I’m not sure how to make this clearer.  Counties around Philadelphia are being limited to under 3% spending growth, while most of the rest of the state enjoys growth rates of over 3%.

This situation is based on a somewhat complicated set of calculations based, per the web site, around “the average of the percentage increase in the Statewide average weekly wage and the Employment Cost Index.”  The data used to calculate these two values is from 2008, two years ago relative to the year, 2010, when we are applying the values.

For the fiscal year of 2010-2011, the base index is 2.9%.  This base index is the lowest rate possible, but counties with lower incomes relative to their collective market values are given an allowance to grow their school spending by more than the base rate, some nearly 1.5% more (for a total of nearly 4.4%).  Because the underlying indices used to calculate are two years old, we can expect the base index to continue to decline in future years depending on how long the ongoing recession lasts.  This is only the beginning, I fear.

I understand most of this, but I have two comments.  First, Montgomery County is not, I suspect, average with respect to the wage increases or the rise in the cost of living across the state.  Instead, I suspect we are probably enough above the average that 2.9% would be a deflationary value for our area.  Limiting our area to such low growth would appear to be a limit on our ability to provide effective educational programs.

What is also frustrating is that most districts spend upwards of 80% of their tax revenue on labor, generally paid through long-term collective bargaining agreements, and most of these agreements have preset increases of more than 3%.  These salary increases, however warranted, could be a problem for districts, such as those in these ring counties around Philadelphia, who have contracts requiring increases greater than 2.9%.  Unless the residents of these districts approve Act 1-mandated referenda permitting greater revenues (yes, taxes) for the district, severe limits on non-labor expenditures will have to make up the difference in staying under the index, and this is no small feat.

The math is not too hard, so here’s an example.  Keeping this to round numbers and assuming labor costs make up 80% of a district’s expenses, if labor costs go up by 3.5%, then other costs can only rise by 1% to stay under a 3% index.  For every additional 1/10th of 1% that labor goes up, other costs may have to go down by roughly 1/2 of 1%.  These seem like small numbers, but when applied to a district budget, they are not and they are real dollars, real programs.

What will be cut to achieve these budget limits?  Stay tuned.  Labor isn’t the only thing rising, either.

[And as I was preparing this post, our local paper published a nice article on the topic.]

These are my collected articles and videos, and do not reflect the opinions of any other person or organization.

Links to other sites are provided for reference and do not necessarily imply an endorsement of those sites or their opinions.

This work is licensed under a Creative Commons Attribution-NonCommercial-ShareAlike 4.0 International License.